Arbor Low, Derbyshire is a prehistoric henge monument, that is, it consists of a circle of stones set inside a circular ditch with a bank enclosing the complete structure. It is unclear what henges were used for but it seems likely that whatever went on there was designed to be seen only by a few chosen people. The bank around the monument would have made it impossible to see activities within the stone circle from outside. Perhaps observers sat on the inner side of the bank, but it would still have been available to only a restricted few. 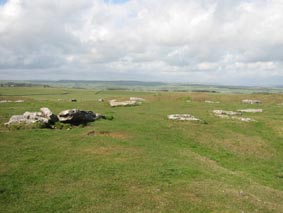 The site is a Neolithic one, built around 5,000 years ago from locally quarried limestone. Superimposed on it is a burial mound dating from the Bronze Age, which was excavated in the 19th century and found to contain two urn burials. The stones would orginally have been upright but they are all now fallen over. There are a number of entrances to the circle that show as gaps in the bank and there is some evidence that a processional way might once have led from the south because there is a linear earthwork close to the southern entrance. About 250 metres away on a horizon to the south west is another Bronze Age burial mound called Gib Hill. It too lies over an earlier monument, a Neolithic long barrow that probably pre-dates the circle.

Arbor Low stands on private land behind a farm at the top of a fairly steep hill. The view from the site is extremely dramatic as it is possible to see for a very long way. Whoever built the site must either have wanted the mound to be visible from a great distance or to be able to see anyone approaching it.