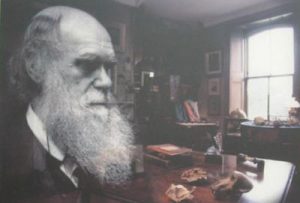 Darwin’s theories scandalised the Victorian world when he first suggested his ideas of evolution. The theories challenged the religious view, at the heart of church belief, that the world was created by god in six days. They also had little to do with the scientific views that held sway at the time and thus the “Origin of Species” alienated him from large sectors of society.

He formed his first ideas about how species develop while he was voyaging on the HMS Beagle on which he was employed as – unpaid – naturalist. His studies of the flora and fauna of the Galapagos Islands made him realise how each species develops to exploit particular resources and therefore become most “fit” for its habitat. The idea of Survival of the Fittest is often misunderstood to mean the strongest, rather than the best adapted.

Without earlier work by people like Lyell, who had already realised the vast expanses of time necessary to undergo the geological processes that had formed the earth, Darwin might have faced a tougher struggle to have his ideas accepted. But the tides of thought were already changing. Others were starting to consider the possibility that natural forces might drive species development and Darwin himself always credited biologist Alfred Russel Wallace with having discovered very similar ideas independently.

His ideas were not without opponents, however, and the overriding opinion among scholars of the day was that Darwin’s theories were mostly conjecture and that there was very little evidence in his publication. There was a special meeting of the British Association for the Advancement of Science a year after “On the Origin of Species by Natural Selection” was published in 1859. It was at this meeting that Darwin’s great opponent Bishop Samuel Wilberforce challenged “Darwin’s Bulldog” T H Huxley by asking whether it was through his grandfather or grandmother that he claimed decent from monkeys. Huxley’s reported reply was that he would rather be decended from two apes than be “a man afraid to face the truth”.

Darwin’s home in later life, and where he wrote “Origin of Species”, was Down House in Kent. The beautiful property stands overlooking the Kent countryside and is surrounded by woods and farmland. Around the house was Darwin’s “thinking path” where he often walked to gather his thoughts before retiring to his study to put them on paper. His experiments were all over the study and often spilled out into the kitchen, drawing room and even on to the billiard table if he needed more room.