At a time when the world is in the grip of a fatal pandemic it might seem a little strange that the Anorak took the one chance a day to go out for exercise and chose a cemetery for a stroll. But think about it. Graveyards are just about the only places where Joe and Josephine Public have the opportunity to leave an enduring mark; some record of their existence. This is written history, albeit rather selective.

Back in the Victorian past headstones were often sombre things – huge, but sombre – but it seems nowadays pretty much anything goes. While a few souls RIP next to a subtle symbol of their lives, others can be distinctly showy. Apparently some people can also be pretty jealous about their space, even after death. Let’s take a stroll around to see what we can discover.

Take this view, for example. Regimented row of headstones, but just look half-way down. Spot the daffodils? And the extra flower vases, inset plaques and bouquets? That’s as sure a way as any of saying “this is my space, keep off”. Of course we have to remember that it’s not the dead doing this. The occupant of the site isn’t getting much say in it. No, what it actually says is: “Don’t walk on my granny!”

Before we go much further it’s worth noting that, as far as possible, recognisable surnames have been obliterated in all these photos. First names have been left in, because these are all people that we’re talking about. But as pointed out above, it’s those left behind who care about such things and they might not like us discussing their friends and family. That’s why we’re not identifying the cemetery either, though a little judicious research might lead you in the right direction. 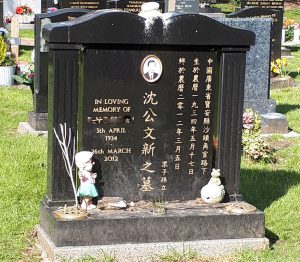 So the next stop is at this gent’s tomb. Clearly he’s of oriental descent because of the writing, but without more information it’s not clear which country his ancestors were from. As some Chinese families put their surnames first, both have been covered up in this photo. But note the pebble on top of the headstone. That’s generally a Jewish tradition, but mourners from many cultures are known to do it as a way to show they have visited the grave and that they care. Maybe he had a Jewish visitor. We don’t know, but someone said hello. The two statues are interesting.They look like garden ornaments. Perhaps he was a gardener. 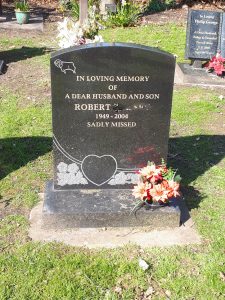 We can tell very little about sadly missed Robert except he was only 55 when he died. We know he was a dear husband and son, but there’s no mention of being a father. He was a Derby County fan, however, as the drawing of ‘Rammy’ shows. How big a fan must he have been to want that on his headstone? 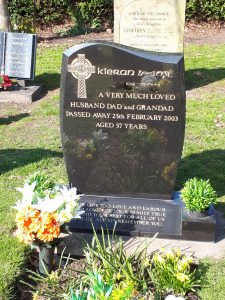 The name and the inscribed Celtic cross on 57-year-old Kieran’s grave suggest he probably has Irish ancestry. Behind him lies Geoffrey, whose family chose an unusual inscription. Lord of the Dance is, of course, one way to refer to god in some denominations. But it might also mean that Geoffrey was himself a dancer of some renown. Who knows? 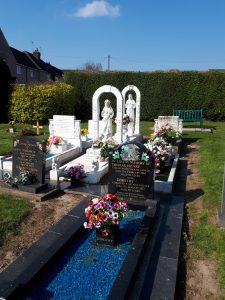 This family clearly want to make an impression. All the graves here share the same surname so it’s a fair bet they’re related. One of the headstones has a romanticised version of a gipsy caravan on it, which implies the family might be travellers. 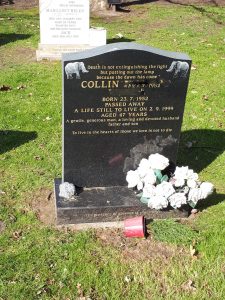 Another stone nearby has elephants on it, so they could even be circus folk. Collin’s surname is different though.

Clearly there are tastes in how the dead are remembered and over the years there have been trends. Graves from earlier dates tend to be more subtle than more modern plots. Shapes have altered, perhaps as the craft of stonemasonry has developed. (Although medieval stonemasons were pretty skilled!) Photographs of the deceased have appeared. Poems fill the stone available. Decorations have become more ornate; less serious. It makes you wonder what’s next. Have you thought about what you want on your own tombstone? 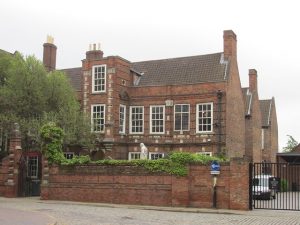 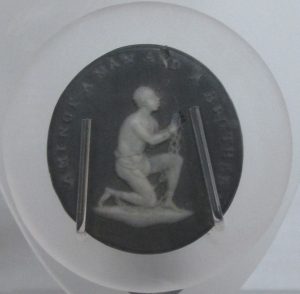