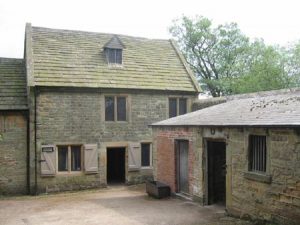 Stainsby Mill stands on the Hardwick Hall estate in Derbyshire and is fully restored and in working order. It has a kiln, drying floor, three pairs of millstones and is driven by a cast iron waterwheel. The 17 feet diameter wheel is high breast shot, meaning that the water is delivered to it slightly above half way up so that the weight of water in the buckets drives it through gravity. The wheel in turn drives a wheel attached to the main shaft. Unusually the gearing is on the inner circumference of the wheel.

The mill leat is supplied by water from Stainsby dam as well as from Millers Pond in Hardwick Park and Stainsby Pond, which was built in 1762 specifically to boost supply to the mill.

There has been a flour mill on or close to the site since the 13th century and from 1593 it was owned by Bess of Hardwick, the celebrated lady of the manor. It fell into disuse in the 1840s but was restored to working condition in 1849/50 when the present wheel, made by Kirkland of Mansfield, was fitted.

There were three pairs of stones, one of which is shown on the right. The bell on the front of the hopper was fixed to a strap thatwas released as most of the grain was milled. So the bell rang to tell the miller when the grain needed topping up. He was on the floor above and could fill the hopper through the cloth sleeve visible above the hopper.

The mill is currently owned by the National Trust.