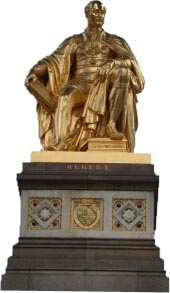 The Albert Memorial is one of the best known monuments of the Victorian Age. Architect George Gilbert Scott wanted to set up something similar to a Medieval shrine and is believed to have been influenced by the Eleanor Crosses set up by King Edward I after the death of his Queen. Those crosses were built at all the places her coffin rested on her funeral procession. Few remain but there is a fine example at Geddington in Northamptonshire.

The memorial to Albert, Victoria’s Prince Consort, has 169 carved figures on a frieze as well as sculptural groups at each corner representing Agriculture, Commerce, Engineering and Manufacture. Other groups represent Africa, America, Asia and Europe. The figure of Albert himself, sculpted by John Foley, is seated at the centre and is covered in gold. The enormous edifice is highly ornate and typical of the overblown High Victorian design of its time. The whole thing is more than 170 feet tall.

Materials used in the construction include glass, stone, cast iron, lead and bronze as well as the gilding on Albert himself. The statue was re-gilded as part of a major overhaul of the monument in the 1990s and was officially reopened in October 1998.