In 1665 a bolt of cloth was delivered from London to the Derbyshire village of Eyam. The cloth was damp, and it was infested with plague carrying fleas. 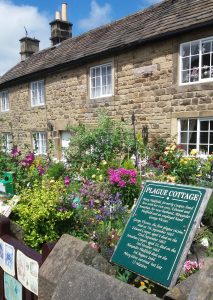 Within days residents were dying, and the village took the courageous decision to cut itself off from the rest of the world to prevent the disease from spreading.

By November the next year 260 of the villages had died – but no-one outside the village had contracted the plague.

Only one of the victim is buried in the churchyard – the vicar’s wife. The rest were buried around the village, in their gardens and away from the centre, in a bid to stop the disease from spreading.

The nursery rhyme Ring a Ring a Roses is believed to have been inspired by the plague. It describes the symptoms – red blisters and sneezing – and the posies of flowers that people carried to ward off the illness.  The perfume of flowers was believed to protect you from infection – just one of the strange ideas of the time.

Others included walnuts steeped in wine; barberries (fruit of the berberis) dried, powdered, then mixed with vinegar; or stripping the feathers from the tail of a pigeon and rubbing the bare skin on the red sores. The pigeon died in the process!