The Black Country Living Museum is a 26 acre site on the edge of Dudley, West Midlands that houses a collection of buildings and structures from around the Black Country.

Where is the Black Country? Well, experts have failed to agree on exactly what its boundaries are in spite of generations of arguments. Some say it is the area that used to be coloured black on geological maps of the Midlands, indicating the presence of coal. Others say it was the traditional iron working area to the north west of Birmingham. Perhaps the best definition is that it is certainly NOT Birmingham but is wherever a Black Country person says it is. For the purposes of this site it is the four boroughs of Wolverhampton, Walsall, Sandwell and Dudley. 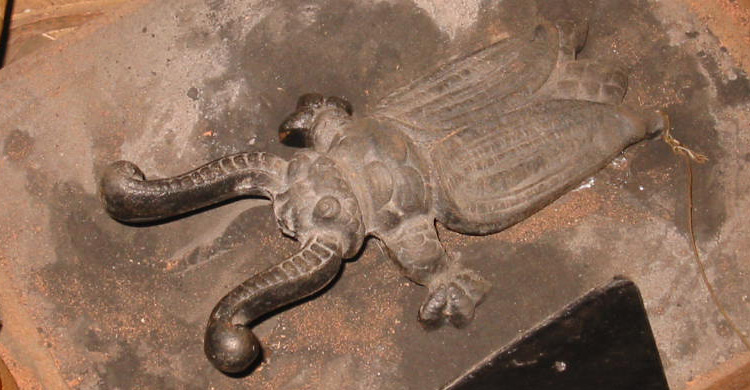 The museum has a fascinating collection of items that were manufactured in the Black Country, now housed in a building that used to be a swimming baths. Each small town and village in the area was famous for its own trade. There were leatherworkers in Walsall, brickmakers in Aldridge, enamellers in Bilston, glassmakers in Stourbridge, chain makers in Netherton, the list is huge. The museum also has an open-air section that takes the form of an early 20th century industrial village, with a picture house, a chip shop, a pub, chapel, cake shop, sweet shop, lots of workshops and all the other necessaries of living.

During a visit to the museum the Anorak decided to take a different view of the site and explore it with one material in mind – iron. It was mostly cast iron, though forges of various kinds can be found there. And it is amazing how much of life involved cast iron in the late 19th and early 20th centuries. That picture above left, for example is the inside of the exhibition hall, the former Rolfe Street Baths building. The roof trusses, or supports,  are made of cast iron. But a look around the site showed that humankind has never really left the Iron Age.

On the Streets, for example, cast iron could be found everywhere. Lamp posts were made from it, as were the traditional red pillar boxes. Roadsigns were also made from cast iron. Even the window frames were iron.

Bridge parapets and boundary fences were also made from the ubiquitous material. It was simple to create elaborate designs by making a mould in sand with a former or pattern. Molten iron was then poured into the mould and left to cool. Repeating patterns could be made in modular form then fixed together. 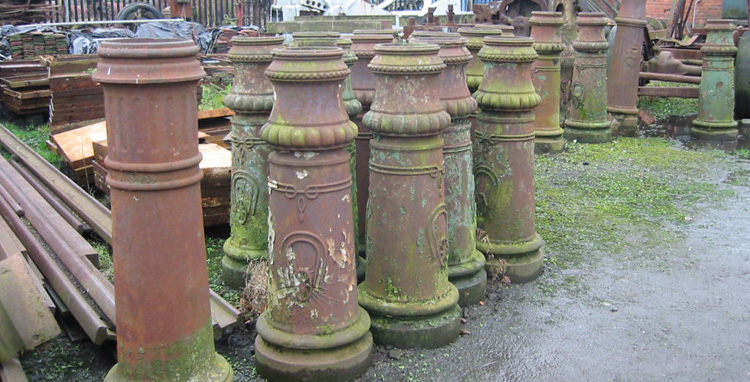 Everyday items were all made from iron. The bootjack by the door that helped a miner take off his dirty footwear before he went into the house was made of cast iron. The one on the left is shown still in its sand former after manufacture. Chimney pots on top of houses, guttering and down-pipes were made of iron. Even the straps around the barrel that helped to make it waterproof were iron bands.

Hinges to work the gate, latches to open the door, almost everything was made of iron. And even after it had served its original purpose, some iron found a new lease of life. A discarded horse shoe was nailed over a cottage door to bring luck. Sometimes even the houses themselves were made from iron.

In the 1920s, when bricks were in short supply, Dudley Council tried an experimental form of construction as a way to clear old slum housing quickly. The walls consisted of 600 plates that were bolted together to make pairs of semi-detached houses. Only a very few were built because the cost proved prohibitive, but two are preserved at the museum.